About – David Giardino is one of London’s foremost solo violinists, specialising particularly as a wedding violinist both in London and further abroad. David performs on both his classical (unamplified) violin as well as electric violin.

If you are looking for a solo wedding violinist or a solo electric violinist as an effective alternative to a string quartet then David will provide you with a highly professional and refined musical experience.

He offers a range of musical styles and moods to suit each changing moment of your special day, ranging from a calming and elegant classical vibe, perfect for ceremonies and drink receptions, through to a high-impact show perfect for pre or post-dinner entertainment.

world-class music for your event 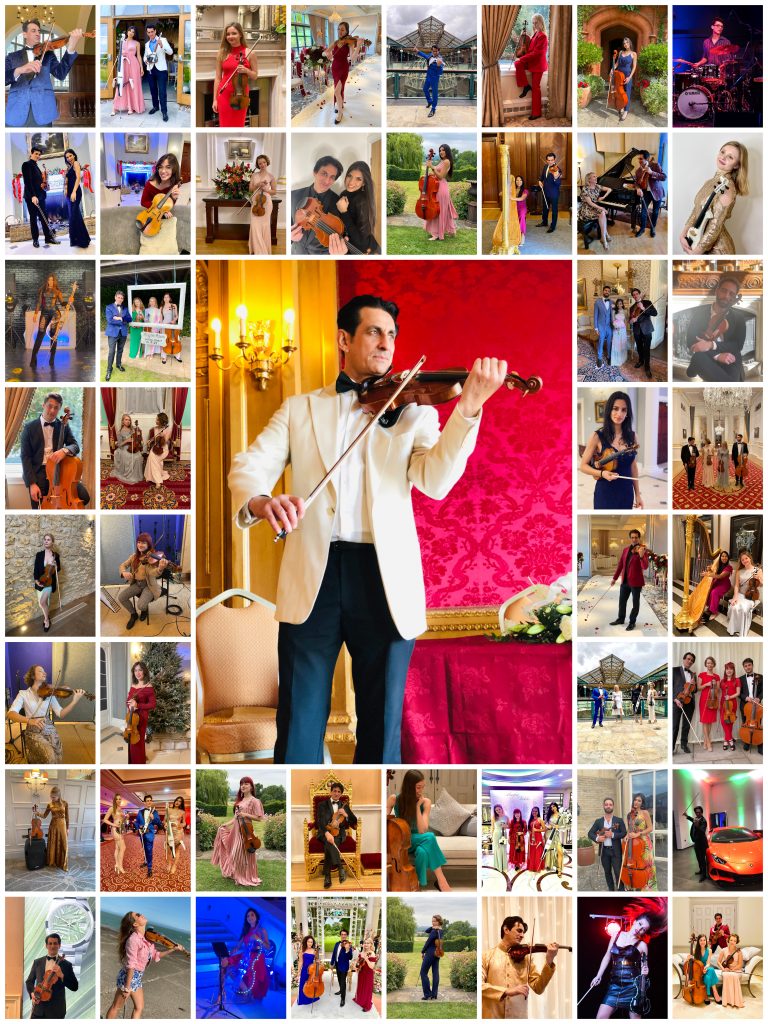 About – Giardino Strings is the brainchild and labour of love of David Giardino. Born in a family of creatives in Southern Italy, David showed signs of his affinity to music at a very young age. His father Paolo wanted him to be a painter like himself, but seeing David’s natural inclination for music, sent him to the prestigious music school – Conservatorio Bari at the age of nine. Started the early training in the strict discipline of the Conservatorio laid the foundation for the impeccable service that Giardino Strings provides today.

During his time at the Conservatorio, David was recognised as a natural talent in violin playing. Seeing that he was taking fast strides into the world of professional music, David’s maestros at the Conservatorio encouraged him to train under a world-renowned expert. He was then put in the charge of renowned violinist and pedagogue, Riccardo Brengola for the next level of his training.

At age twenty, David was inducted into the famous Rome Opera House as a Professor of Orchestra. They were travelled extensively through Europe, Asia and South America performing with the orchestra. David decided to move to London in 1995, wanting to further expand his career. When he arrived in the U.K., he played with prestigious groups like the Birmingham Ballet and Oxford Philharmonic.

In 1999, David came across an opportunity to independently organise and perform music for an event. This was an area he had never explored before, so he decided to take it up for fun. The event turned out to be such a success that more such offers started pouring it.

Soon David realised his potential as a curator of musical services. He was not only a talented musician, but also possessed the knack to bring together ensembles to fit the specific requirements of his clients.

From that one event done for fun in 1999, Giardino Strings has come a long way to performing for over 230 events in the year 2019. Every piece played by the group is well researched and lovingly arranged to provide a memorable event for the listeners. Giardino Strings’ long list of distinguished patrons includes Lord Michael Levi, Tony Blair, Sir Evelyn de Rothschild and even our beloved Queen Elizabeth II.

The services provided by Giardino Strings’ include all kinds of musical ensembles. David works closely with his clients to understand their specific needs to create a performance to remember. From weddings to corporate events, Jewish ceremonies to Bollywood music, orchestras to quartets – whatever you need, Giardino Strings has you covered.

With more than 30 years of experience in the industry David makes Giardino Strings the most sought after string music group in the U.K. The clients of Giardino Strings often become repeat clients due to the diligence, love and care David puts into each event. If you need world-class music at your event, with the care of one of London’s best music professionals, contact Giardino Strings today!

We are trusted by the best Brands

Giardino Strings were fantastic at my daughter's Bat Mitzvah. David was a pleasure to deal with in the run up to the event and nothing was too much trouble. They created a lovely atmosphere on the evening and even accompanied my daughter whilst she played. I wouldn't hesitate to use them again. Thank you!
Jeremy Nicholls
Giardino Strings are absolutely fantastic, they made our wedding so special with their Bollywood instrumental performances with a twist of their English repertoire. A very professional team and would highly recommend them to future friends and family. A massive thank you to the David and the team, you were outstanding!
Simran Kalsi
I had the String Duo perform at my intimate wedding in East London and they were wonderful! So professional, friendly and undoubtedly talented! I'll never forget walking down the aisle with my Father while they played my entrance song perfectly. Would recommend to anyone looking for an added musical touch at any event!
Erika Getchell
Booked last minute, within a week and David got back to me straight away. They were very professional and were perfect for a corporate dinner of 20 people. They played a range of classical/pop but kept the atmosphere very intimate and classy. Would definitely recommend and will be using again!
Phillipa Norton
We hired Giardino Strings for our wedding on the 01 June 2019! They were absolutely amazing!!! They really set our day off perfectly and received raucous and well deserved applause. We would absolutely recommend them to anybody considering hiring strings for any type of event. Thank you Giardino Strings for making our wedding extra special.
Carolyn and Francis
I would give Giardino strings a 5 star we had David play the violin for our guests at our son's wedding. He played absolutely beautifully. I could literally hear him play all day everyday. I gave him a last minute tune to play for my son's entrance and he adapted to it very quickly and played beautifully. I will definitely use him again and I have to say he was so polite and professional from start to end.
Anbreen Modi
We hired the quartet to play at our wedding. Absolutely wowed our guests, were told time and time again how amazingly they played at our drinks reception! They also had all of our guests with their phones out filming when they played a breathtaking piece for our entrance. Would absolutely book again for other events.
Tushar and Jasbir Wadhwani
Giardino Strings played our wedding in October 2016 and were brilliant. They had a great repertoire of songs and we were able to pick music to make our ceremony truly personal. Our guests were very impressed with the trio during the drinks reception. I would highly recommend them.
Emma Standen
The Giardino String Quartet were fantastic, so easy to work with and really set the tone for the evening – being fun and upbeat while remaining classy – everything we were looking for. They sounded great and looked great, a perfect fit for the iconic St. Pancras Renaissance Hotel.
Victoria Collins
David was outstanding. He was the perfect addition for my wedding. My guests are still talking about how talented he is - and it's been 1 month since the wedding day! 100% wholeheartedly recommend booking David for your special day.
Jessica Jackson
Brilliant we highly recommend. David + 2 joined our wedding in Sussex, they coped with fact they were playing at our wedding in a field amidst hay bales and still sounded great. Your rendition of the Beatles "All you Need Is love" will go down in folklore!
Jonathan Petrides
We had the harp and violin duo for my sister in law's wedding and they played beautifully and sounded so good together! David and the team were so accommodating and flexible despite it all being so last minute. Knowledgeable to boot! Would thoroughly recommend.
Preya Kumar
Previous
Next

Get in touch today

David Giardino is one of London’s foremost solo violinists, both in London and further abroad performing with his classical violin and electric violin.